Road surface repair works will be carried out on M5 Motorway between 21st May and 27th May 2019 in the direction of Szeged between chainage 145 and 150 km.

The works start on 21 May 2019 on the affected sections, there will be one traffic lane available for the travellers during installing the traffic diversion. The traffic in the direction of Szeged will be diverted from the slow lane into the fast lane between chainage 145 and 150 km during the road surface repair works with closing the slow and emergency lanes. During the works there will be one traffic lane, the fast lane available for the travellers in the direction of Szeged.
Travellers will be able to leave and enter the motorway from both directions at Balástya interchange on the temporarily installed traffic lanes. The road surface repair works are expected to be finished foreseeably on 27th May 2019.
During the pavement reconstruction works the maximum speed will be limited to 60 km/h. 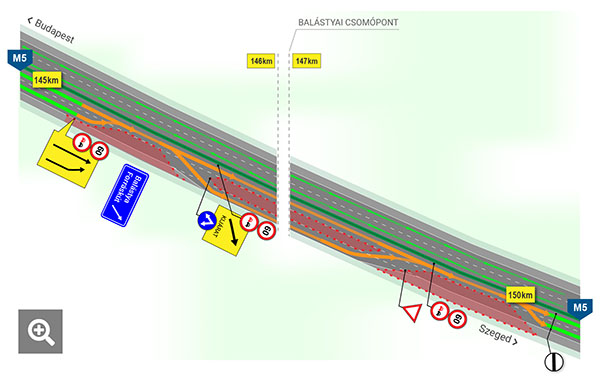 Information about current traffic restrictions and diversions will be continuously provided by Útinform on www.utinform.hu website, AKA Zrt. on www.aka.hu/en website and the operator – AWAY Zrt. AKA Zrt. asks travellers to drive more carefully, with keeping the speed limit on the M5 motorway.
Unforeseeable events may result changes in the above mentioned schedule, AKA Zrt. reserves the right to modify the schedule of maintenance works.